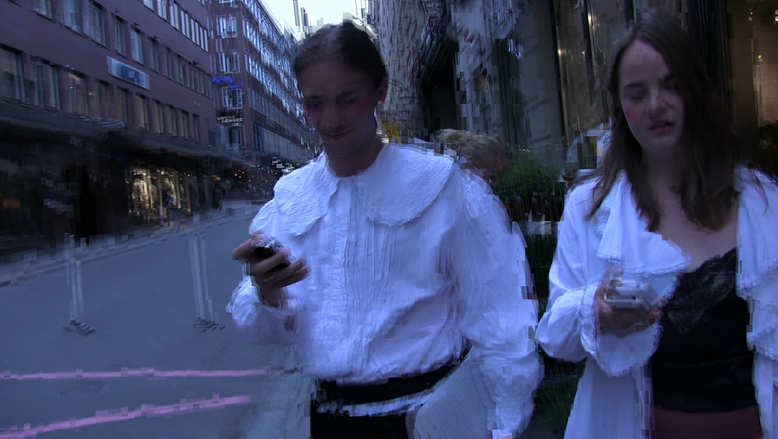 work performed continuously the course of the opening evening.

"Fjäriln vingad syns på haga" is the title of a song from 1971 by troubadour Carl Michael Bellman.

Two actors performed and walked in an orbit based on the one of a joyride attraction "Veteran cars" in the amusement park Gröna Lund. The joyride features riding a car on a rail in a constructed loomy park-type atmosphere, in the calmer part of the park. The route surrounds a miniature garden  with flowers and faux sculptures/busts, one of them depicting C.M. Bellman and another one Ulla Winblahd, a contemporary and aquintance of Bellman who often appeared in his lyrics. The joyride renders a thematic and temporal shift within the amusement park itself, and its confinments figures as somewhat a park within a park (the amusement park). The sculptures act sculptures in the fictional thematic space, rather than being sculptures. The blurry line of fiction and reality in the autoficticious lyrics of Bellman is often entagled in the myth of his persona. Whether he knew the people he sang of remains unknown.

The interior architecture of the restaurant Taverna Brillo in Stockholm has two entrances and which are connected via a wooden-tile pathway on the floor. The pathway starts in one end of the building, passing the restaurant area, kitchen and the bar and to an exit on another street (and vice versa).

In the middle of the pathway – a space inside glass with tables and chairs for guests is located inside the so called Green house bar. On the walls along the route hung iPhone photographs taken from a car on the joyride "Veteran cars". The camera aimed at the inside of the attraction, the garden and the sculptures, subsequently acting as a 360 degree scan.

Two characters in 18th century attire acted out a script based on notions of romanticism, nostalgia, seeing and dialectics of nature and culture. They walked through the restaurant according to the rails of the joyride stopping at the third loop at a table in the space within glass walls. The performance ended inside that space. The length and tempo of the performance tried to match the duration of the joyride.

The photographs remained taped to the walls of the restaurant for a duration of an exhibition and were also for sale. 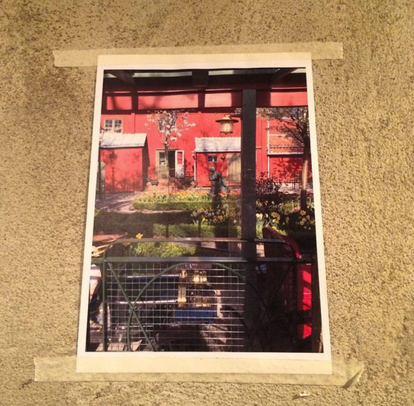